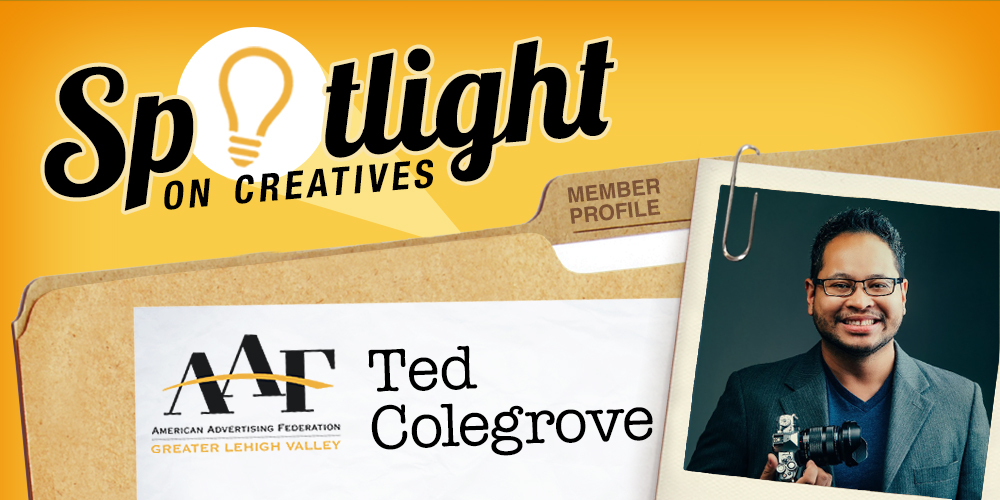 The November #AAFSpotlight shines on Ted Colegrove. Ted is an Adjunct Professor of Interactive Design at Moravian College, a Senior Designer for Olympus, and an accomplished Photographer.

Aside from focusing on and honing their skills and talents, how do you prepare your students for the professional world of Graphic Arts?
There are a few points that I really try to get across during my class at Moravian. First: Time management. It’s key to being a successful interactive designer. If you learn these skills early, “real world” projects won’t be as daunting. Next: Exploration and creativity. Take the time that your college career allows to really explore the vast world of graphic design. Try new things, fail and try again, learn from those mistakes and then add them to your experience. Finally: Networking. As much as I want everyone to leave Moravian with a good portfolio, I can’t stress enough that students must make connections with people in the design community outside the walls of college. Utilize design groups like AAF & AIGA to network and learn about the craft and their experiences directly from the design community.

What Professor has inspired you during your time as a student?
When I first started as a graphic design student my typography skills were lacking. My Typography Professor gave me a royal awakening. As much as I loathed the homework and the endless amounts of time spent under the hot track lights critiquing each other’s work, that class was one of the most important for me at Moravian. The Professor inspired me to love type, to the point that I constantly buy typeface-packs on designer market places because I ‘might’ use that typeface someday. You could call me a font hoarder.

Has a student ever inspired you during your time as an Educator?
Every semester I have students who inspire me. It’s the reason I keep coming back year after year. It’s so exciting to see students really discover themselves as interactive designers. From the first foray into designing for the web, to making a fully responsive and dynamic website, each student’s journey through reworking design and debugging code is absolutely rewarding.

What’s the single-most important thing to consider when designing an interface?
Audience. Know your users, know your audience, and design towards their strengths. I say this time and time again, you wouldn’t design an interface for your parents the same way you’d design an interface for your peers. As much as we like to make things look cool, if the user has no concept or understanding of how to navigate our interface, the point of our design is lost. It’s up to us to guide our users on a journey – easily, accurately, and beautifully.

Describe the favorite photo you’ve ever taken. What song do you think compliments the visual perfectly?
Towards the end of Musikfest 2015, amongst the backdrop of the fireworks at Steel Stacks was a long exposure of some writing that I had superimposed into the shot. It read “She Said Yes,” in bright white flashlight-writing. It was the night that I proposed to my wife atop the ArtsQuest building, where consequently I took my most famous shot 2 years before. The song that would best compliment the colors and movement in the shot would be: Swoon by the Chemical Brothers. It’s running line is “Just remember to fall in love. There’s nothing else.”.

Currently, how big is the logo? Do you see it getting bigger? The client wants to know.
Not big enough. But I have my go-to, “Make my logo bigger” cream which really helps. Coupled with the “Whitespace Eliminator” and the “Starburst Dust” the combo is second to none for clean design, great execution, and designer satisfaction. If only they made “Papyrus Ointment” and “Comic-sans scrub” I’d be set for life. For more information on these revolutionary products, click here.

About Ted:
Ted is a unicorn. He’s a Senior Graphic Designer at Olympus Corporation of the Americas, where he’s responsible for the majority of the web material for consumer products group (Cameras). He’s an adjunct professor of interactive design at Moravian College, where he teaches front end design and development. Ted also is a relatively successful freelance photographer specializing in lifestyle, event, and studio photography. Apart from his duties to Olympus, Moravian, and Photography he’s a small business owner where he produces retail accessories and apparel. At home he’s blessed with his awesome wife Andrea, who puts up with all of his interests and really centers him so he can focus on taking selfies of himself for product photos in his basement studio until 3am.