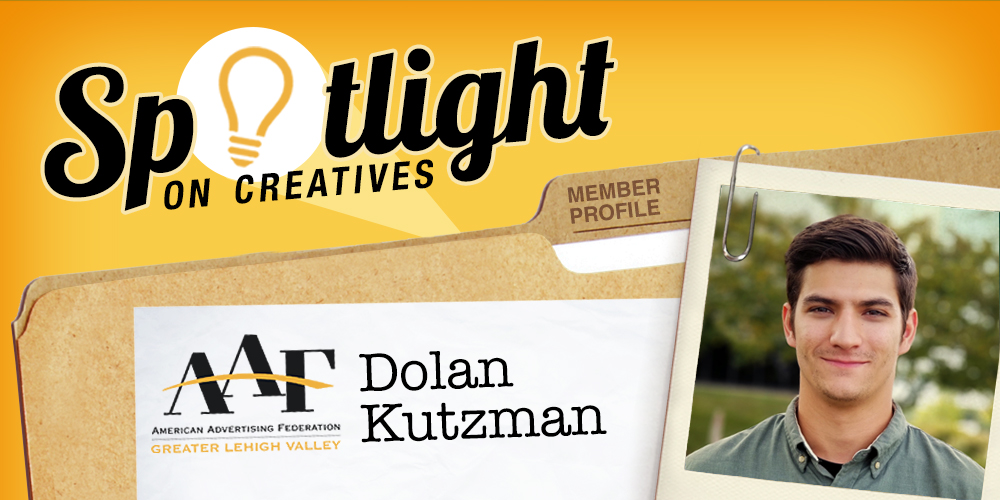 Our Summer #AAFSpotlight shines on Dolan Kutzman. Dolan is a Motion Graphics Artist for Liquid Interactive.

You’re part of a terrific team of Creative pros. However, which famous figure (alive or dead) would you REALLY like to share an office with?
I’d have to say Andrew Kramer from Video Copilot. He’s an incredibly talented visual effects wizard who can teach you anything you need to know about After Effects. My passion for motion graphics was actually sparked by watching Video Copilot tutorials in college. His positive approach and excitement for doing what he loves is inspiring. I can only imagine how much I could learn from Andrew if I shared an office with him. Oh, and Michael Scott is a close second in case you were wondering.

If it could talk, which animal is best-suited to do your job?
Definitely a giraffe. I’m pretty sure they sleep for only 30 minutes a day, which is just wild. Imagine how much work you could get done without having to worry about sleeping. Although, having hooves would make the job pretty challenging, I think it’s a pretty solid trade-off.

Every creative project demands its own unique approach to its challenges – however, what is ONE thing you do consistently with EVERY project?
The one thing I do consistently with every single project is setup my file structure and naming conventions. The amount of time and frustration this saves down the line is remarkable. The last thing I need to worry about is derailing the creative groove train by trying to find an asset that I lost because I was too lazy to organize my files. Taking the extra couple seconds to rename a file or move it to the appropriate folder is well worth the effort.

What’s the last movie you saw? Was there a scene or some dialogue that reminded you of work?
The last movie I saw was Joe Lynch’s Mayhem. I’m happy to say that absolutely nothing about that movie reminded me of work. If you’re unfamiliar with the film, let’s just say that it’s a good sign that I work with some great people. Although I did borrow it from a co-worker …

After a long year of putting your all into projects – how does your team determine what to submit to The Addys?
Having such a talented team can make it tough because the quantity and quality of creative output throughout the year is very high. However, the best work usually speaks for itself and the decision of what to submit is pretty apparent when the time comes.

Currently, how big is the logo? Do you see it getting bigger? The client wants to know?
The logo is one of the few exceptions to the “Bigger is Better” rule. Focus on the brand’s message and you’d be surprised at how visible a “small” logo can be.

About Dolan:
Dolan works at Liquid Interactive as a Motion Graphics Artist where he uses the power of animation to help clients communicate their message in a more engaging and effective way. He graduated from Northampton Community College where he was first exposed to the glorious world of motion graphics. From there, he transferred to Penn State University to continue to hone his skills and graduated with a Bachelor’s degree in Integrative Arts. He spends most of his time with his beautiful wife Maegen and their two dopey Australian Shepherds, Ruxin and Newton. Dolan’s also a mediocre drummer in an experimental rock band called Betty Netch and when it’s warm enough outside you can usually find him at the skate park attempting to not break his ankles. During the winter he’ll hibernate, play video games, and contemplate the meaning of Shark Week™.